In what the Conservative party is now calling an “internal miscommunication”, robotic pollsters, claiming to originate from a possibly fictitious company named Chase Research, polled Saskatchewan voters on a proposed redrawing of their electoral boundaries.  Unaware of their Tory origins, the machines misidentified themselves,  for which the Harper government is taking criticism.  It is heartbreakingly sad when a robot is programmed with no knowledge of its master, and we must ask if the poll was influenced by an orphan’s yearning to find its parents.  The Conservatives now admit they made a mistake, but this likely comes as little solace to their telephonic progeny.  The resulting scandal, however, has brought to the forefront the extreme distortions in representative democracy which can result from a first past the post parliamentary system.

“First past the post” describes winner-take-all electoral systems such as Canada’s where each riding counts it’s votes and awards a seat in parliament to the winner.  Those who voted for losing candidates  have effectively no influence on the composition of the government.  Whether you voted for the loyal opposition, the Anarcho-Statist Party of Canada, or yourself, it is irrelevant.  Your vote was counted, but you don’t count at all.  If you are lucky, a hipper, smarter, more enlightened riding has elected another MP of the same party to represent your values in Parliament.  This system explains how a man like Stephen Harper can have 100% of the legislative power with 39.6% of the popular vote, and why smaller parties, such as the Greens, have such a hard time convincing Canadians to throw their vote away on them.

In the 2011 federal election, the Conservative party won 13 of Saskatchewan’s 14 seats with an underwhelming 56.3% of votes.  The Liberals captured the one remaining seat with an adorable 8.6%.  Of the remaining votes, 32.3% of the total went to the NDP and promptly evaporated into irrelevance.

Behind the Numbers saved us the trouble of doing math and tells us that the Conservatives won one seat for every 19 692 votes, the Liberals took only one seat for their 38 981 votes, and the NDP’s 147 084 votes amounted to not one single MP to represent the province.

These disparate vote-to-seat ratios are possible because of the unique character of Saskatchewan’s electoral boundaries. Despite having the two metropolises of Regina and Saskatoon, the province has no purely urban ridings.  Instead, urban voters are divided into wedges and incorporated into larger, rurally-dominated ridings.  It so happens that the NDP and Liberal parties have tended to do better in the cities in recent history, while the Conservatives carry the rural vote, diluting the urban vote in mixed density ridings.

Defenders of the present arrangement claim that creating urban-only ridings would result in rural ridings that are too large, or that rural and urban interests would be pitted against one another.  For the first charge, one only need to look at the ridings of Nunavut, Yukon, and Western Arctic, which comprise the entirety of Nunavut, the Yukon and the North West Territories, respectively.  As to the second, the contrary voting patterns of urban and rural voters show that their interests are already pitted against one another, only the electoral boundaries are drawn in such a way for rural interests to always prevail.

Every ten years, provincially based electoral boundary commissions review these boundaries, and determine whether or not they should be redrawn.  The Conservative push-poll was a response to a proposal to create urban ridings in Saskatchewan.  Automated pollsters warned that these boundary changes would “destroy Saskatchewan values,” though it is questionable whether the 43.7% of those who did not vote Tory would agree.

“The Saskatchewan boundary commission has decided to ignore our important traditions and history,” said the drones. 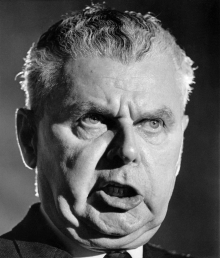 This is not the first time federal Conservatives have invoked history to attack a proposed redrawing of Saskatchewan’s ridings.  In 1966, infamous conservative android John Diefenbaker attacked the first remapping in Saskatchewan following the implementation of the Electoral Boundaries and Adjustment Act, for defying historical precedent.  The changes in question were the elimination of urban ridings in Regina and Saskatoon.

In 2003, the NDP fought against a proposal to reinstitute Saskatchewan’s urban ridings.  Success in that debate paved the way for zero NDP members of Parliament in the province over four consecutive federal elections.

This inconsistent partisanship on the matter suggests there may be no inherent advantage for one party or another in how Saskatchewan’s electoral boundaries are drawn.  If a third of the province’s voters can’t elect a single MP of their party of choice, however, there is indeed something wrong with the system.  One solution is to redraw boundaries to better reflect shared interests, values, and geography.

Yet to do so would be to preserve an electoral system that denies everyone who voted for their riding’s runner up representation.  In 2011, the Liberals received 11% of seats for 18.9% of the votes Canada-wide. The Bloc got 6% of the popular vote, but only 1% of seats.  Elizabeth May’s seat represents 0.3% of Parliament, but her Green Party received 3.9% of votes.  Only the NDP was consistent, despite their troubles in Saskatchewan, with a third of seats representing a third of Canada’s voters.  The Conservatives were the only party to come out ahead.

Were Canada to adopt a proportional representation system, where parliamentary seats are divvied up based on the popular vote, all voters would be represented. Stephen Harper would likely not be the Prime Minister, and most Canadians would be happy about that.  Best of all, nobody would be arguing about the electoral boundaries of Saskatchewan, as federal politicians have been for half a century.

The NDP insists that they “would never countenance a  deceitful phone campaign designed to coerce an independent boundary commission to bow to political pressure.”

Atop such a high horse, it is surprising the NDP can’t see the big picture. The distorted relationship between seats and votes revealed by the off label pollbot controversy has created the perfect moment to push for proportional representation, which the party has supported for years.

The Conservatives did not break any rules by creating the poll, electoral commissions are non-partisan entities which welcome opinions from voters and political parties.  That these polls did not mention they were asking on behalf of the Conservative Party of Canada may constitute a breach of ethics, but that is beside the point.

The dissenting opinion on Saskatchewan’s boundary commission, issued a report  claiming that 75% of submissions received regarding the proposal were against it.  If indeed this number is correct, and the majority of Saskatchewan voters oppose the proposed redrawing of electoral boundaries, should that even matter?  Clearly there is a substantial minority of the Saskatchewan electorate whose votes in the 2011 federal election have produced no representation.  It is unsurprising that the winners of the day should oppose rule changes that would benefit the losers, but that does not mean a dictatorship of the majority should be allowed to dilute the political voice of a substantial voting bloc.

In 1964, Prime Minister Pearson, with the unanimous support of Parliament, passed the Electoral Boundaries Adjustment Act, leading to the development of provincial commissions in charge of drawing electoral boundaries.  The law was the end product of a push for independently minded commissions started by Prime Minister Diefenbaker, who was responding to perceived gerrymandering in Saskatchewan by the Liberal party.  Forty-nine years later, the ridings of that province are making national news again.

It would be fitting if a minor scandal over techno-foundlings led to a broader discussion on Canada’s electoral system in the same province where the dread beast Gerrymander was slain.  It would be good if such discussions led to the adoption of some form of proportional representation and a functional democracy that represented all whom voted.  Unfortunately, with a majority government that benefits from the status quo, and two parties on the left unable or unwilling to seriously consider a coalition, it’s probably not going to happen.

On Sunday, a blindfolded Egyptian boy between the ages of 5 and 8 will select the next pope of the Coptic Christians from among three candidates.  It is difficult to understand how our current electoral system is any better or different.

As photographic evidence suggests, the same could be said for the Yanks : 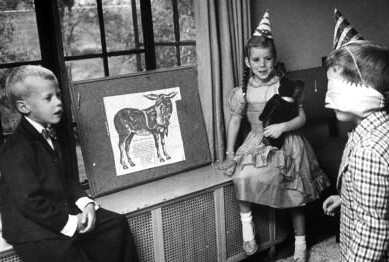 Featured : (from left to right) Barack Obama in whiteface, Mitt Romney in drag, and the American voter in ironic party hat.