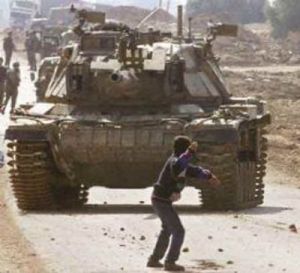 A rebellious Palestinian youth about to inflict severe property damage

The children of Palestine, long infamous for delinquent behavior such as throwing rocks at Israeli peace keepers and armoured personnel carriers, have decided to celebrate Wednesday’s ceasefire by playing hooky.

Though the numbers of these truants remain low, only 30 have been reported missing so far, if the past is any indication we can only expect to see even more kids skipping out on their studies.  Following Israel’s Operation Cast Lead in 2009, up to 300 went missing from the attendance rolls, never to reappear.

In 2009, teachers conducted a ‘public shaming’ by placing the names of truant kids upon their desks and taking snapshots. Note the little boy in the front, and his acute disappointment in his study-buddy’s failure to attend.

Despite the fact that the most recent eight days of conflict between Israel and Hamas destroyed 10,000 Palestinian homes and provided a myriad of legitimate excuses to miss a day or two of class for housekeeping, teachers report having received no signed permission slips from parents of absent students.

There is nothing new to this behavior.  For years now, Palestinian children in Hebron have been dropping out with complaints of being stoned by Israelis on their way to school.  Yet whenever these same Arab students had IDF escorts, the soldiers could not corroborate these claims.

“We are expected to believe that the presence of armed gunmen will discourage citizens of the West Bank from throwing rocks,” said IDF spokesman Sacha Dratwa, noting the extreme levels of bigotry amongst settlers, “The whole thing is absurd.”

It is difficult to expect anything less from the culture of entitlement that has emerged in the Occupied Territories.  With 30% of Gazans out of work and 80% living off of UN handouts, it is no wonder that children are growing up with the attitude that everything in life will be provided for them with no effort or gumption required on their part.

Dratwa was also very critical of Palestinian attempts to explain away the lackadaisical performance of their school children.

“The Arabs are always saying their kids can’t attend class because they’re dead,” he said, “But unconstructive statements such as these are counterproductive to the peace process.  They only serve as propaganda for the terrorists.”

There is ample evidence that Western journalists are accepting these claims of victimhood.  On November 15th the Washington Post ran a front page photograph of an Arab journalist cradling the corpse of his son, his face a melodramatic caricature of grief.   The paper failed to provide relevant context,  or to balance this photo with one depicting the high costs of war for the Israeli people.  Despite heavy criticism the paper did not back down, and writer Patrick B. Pexton offered a disingenuous defense of his employer by pointing out, that as of that date, no Israelis had been killed by Hamas in this most recent bout of violence.

“It’s as if the Western media doesn’t understand that all Palestinians are born with terrorist sympathies,” said Dratwa, “Given how many of them we kill on a semi-regular basis, it’s only a matter of time before they turn violent.”

“I have yet to actually see the movie The Minority Report, but I fully accept its premise,” he added.

“It is preposterous that launching 1500 airstrikes over 8 days upon the 5th most densely populated area in the world would result in heavy civilian casualties.  It has already been proven that Israel takes great pains to avoid collateral damage.  For instance, when we bomb the homes of the Hamas leadership, we make sure to do so during business hours, when people should be at work, and their children in school.  These are residential areas we’re talking about.  We don’t want anyone to get hurt.”

The proof Netanyahu referred to, was this report by an unbiased source, listing the measures the IDF employ to mitigate civilian deaths.

The Prime Minister finished his speech with a stern warning to Hamas and the truant Palestinian kids.

“The state of Israel cannot abide young students being denied lessons in arithmetic so that they can be sent to some terrorist summer camp.  We will not be able to discuss a long-term peace settlement with the Palestinians until these children ‘rise from the grave’, so to speak, and Hit the Books once again.”

Gods & Services cannot confirm this as of yet, but according to some observers of Netanyahu’s public address, the Israeli Prime Minister did indeed make little quotation marks with his fingers.

No need to panic: This photograph has been doctored. Bibi does not have six fingers, and he is definitely not any kind of Ultra-Bigoted Militaristic Doom Mutant.