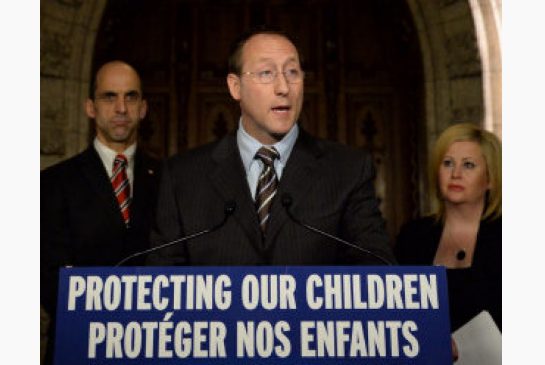 1. Bill C-13 is a bill before Parliament supposedly intended to address cyberbullying.

2. Cyberbullying led to the tragic suicides of two girls recently. It was obviously very sad. There are already laws on the books that could have helped these girls, but nobody seemed to care because neither of them were famous or dead at the time.

3. Instead of enforcing preexisting laws, Bill C-13 has been written to reiterate laws which already exist, though someone will still need to enforce them at some point if they are to have any effect.

4. Additionally, instead of addressing the question of why young women are made to feel ashamed of their sexuality while the sexuality of young women is fetishized by the entertainment and advertising industries, we have a bill before Parliament that will land you in a lot of hot water if you dare steal your cable TV hook up.

5. In fact, most of Bill C-13 doesn’t address cyberbullying at all, most of it further empowers law enforcement to erode our right to be safe from unreasonable search and seizure as stated in section 8 of the Charter of Rights and Freedoms.

6. Bill C-13 is a lot like Bill C-30, the online surveillance bill that failed last year, the one that had a lot of people upset because then Public Safety Minister Vic Toews said that anyone who opposed the bill was siding with child pornographers. Either due to the negative PR that exploded following that statement, or out of the discomfort of arguing with a room full of alleged child pornography enthusiasts, the bill was withdrawn.

7. Bill C-30 was very unpopular, but I suspect it had something to do with the Public Safety Minister saying something stupid. People love it when politicians say something stupid because it makes them feel smart, especially journalists. So far, the Conservatives have not said anything particularly stupid about Bill C-13, so it will probably pass this spring.

8. Despite the public statements of Minister of Justice Peter Mackay to the contrary, Bill C-13 will allow for law enforcement to have warrantless access to information of subscribers to Internet and telephone services. Which means that one does not have to be suspected of cyberbullying, child pornography related crimes, terrorism, or even jaywalking for the police to investigate them.

9. Often, people will suggest that privacy invading laws don’t bother them because they’re not doing anything wrong, and who would take an interest in them anyways? Often, the people who say such things do not belong to the demographics most likely to have their privacy invaded by such laws. They are also woefully ignorant of history.