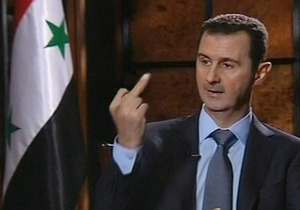 Bashar Assad offering one of his trademark conciliatory gestures.

In the geopolitical equivalent of standing next to the fat girl in order to look skinny, the international community eagerly awaits Syria’s use of chemical weapons upon its own people, to take the heat off of them from their own critics.

Infotainment professionals in the United States have repeated reports from unnamed sources in the US government, whom are said to be reliable, that increased activity has been seen at Syrian sites which house weapons of mass destruction.  It is believed that Syria possesses the ingredients for sarin, a deadly nerve agent, and that President Bashar Assad could be in the process of preparing the chemical for use against rebel forces in Syria’s 20 month civil war.

World leaders have greeted these reports with a mixture stern warnings and sighs of relief.  Gods & Services presents a weekly round-up of the international response:

“Their new album was really disappointing,” said Vladimir Putin, “after they replaced their original guitarist they haven’t been the same.”

Turkey welcomed the news in the face of criticism for its jailing of thousands of Kurdish citizens since 2009, including many journalists and human rights activists.

“Turkey is a democracy,” said Prime Minister Tayyip Erdogan, “it’s not my fault if the 18 million Kurds here can’t vote themselves up some civil rights.  There are proper ways to oppress people in the civilized world, Assad just doesn’t understand that.”

In a joint press conference with German Chancellor Angela Merkel, Israeli Prime Minister Benjamin Netanyahu admitted that if Assad does make use of his stockpile of sarin, images of sweaty, twitching Syrians unable to breath, with drool and vomit spewing from their mouths and excrement dripping down their pant legs, will be a breath of fresh air for his nation.

As one of few countries to have not signed the nuclear Non Proliferation Treaty, and widely believed to possess an arsenal of nuclear weapons, Netanyahu hopes Syrian war crimes will put to rest the recent request by the United Nations General Assembly for weapons inspectors to be allowed into Israel.

Chancellor Merkel herself addressed the issue in light of the ongoing European economic crisis.

“Maybe Germany can finally get back to imposing crippling austerity measures upon Greece without incurring any criticism now,” she said, “and just generally carrying on as if we’ve never heard of a man called John Maynard Keynes.”

Amidst the unnecessary rubble of the recent 8 day war, in which Hamas learned once again that perhaps they cannot take on the Israeli Defense Force through military means, a spokesman was quoted to say: “Hopefully, once Assad releases the gaseous atrocity upon his own people, it will really put the Palestinian issue in context.  Maybe then the world will see that launching 1500 crude rockets over the heads of terrified civilians isn’t such a bad thing.”

In the United States, a group of jubilant Marines celebrated the coming war crimes by urinating upon the naked body of Bradley Manning after his recent appearance in court.  Manning faces charges over his leak of classified videos documenting American war crimes in Iraq and Afghanistan.

“We can finally get back to business as usual,” said Brigadier General Chuck Choda, “Drone strikes may kill a lot of civilians, but as the leaked videos demonstrate, you can have a lot more fun when you’re right there to pull the trigger yourself.” 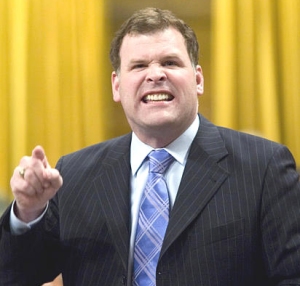 Canadian Minister of Foreign Affairs John Baird, was similarly grateful for the new round of condemnation upon Syria.

“Our government has received a lot of flak domestically and internationally for being one of the few countries to oppose the Palestinian Authority’s unilateral move to gain multilateral recognition.  As if seeking  status as a state in any way furthers the goal of finding a two-state solution.  It’s ridiculous.”

“Hopefully, if Syria starts firing deadly toxins upon is populous, people will stop talking about me.  And with a little luck, Canada can stand by and do as little as possible while thousands die.  It’s worked so far.”

Indeed, with an estimated 40,000 dead since the civil war broke out in March 2011, news coming out of Syria has become rather stale.  To date, these deaths have been caused almost exclusively by traditional bullets and explosions, a relatively boring way to die which fails to meet the basic threshold of entertainment value that would provoke a humanitarian intervention.  Should Assad use weaponized sarin upon the Syrian people, particularly civilians, world leaders can embark on a new round of grand standing and venting of moral indignation.  The inevitable footage of prone bodies, either paralyzed or dead, will send a strong message to their own constituents to be happy with what they have.